skip to main | skip to sidebar

These are some of my views.
If you don't like them,
I have more. 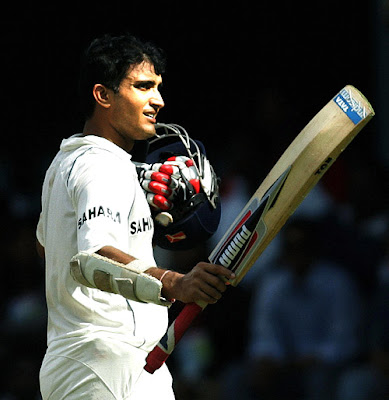 " To have started with a flourish
and ended with a nought
- A prince in his own parish
None tell him what he ought.........
"


But in the end it all fits well into the fascinating collage that was the script of Sourav Ganguly's cricketing career.


Twelve eventful years at the highest level of the sport and to bid adieu in the security of the knowledge that you won't be forgotten, ever, speaks of the man's feats for itself. Die-hard fans and detractors alike would have found it an honour to stand up in ovation as he climbed the stairs after his last stint on the crease. And every bit of applause that he got on this day was as deserved as the fate that met with the balls that pitched outside his off-stump. Not as murderous as the Jayasuriyas of his time, nor as wristy as the Anwars in full flow, he would cajole and caress the ball with his gift of supreme timing, all the while donning an expression of lordly dismissiveness. The man whose middle name could be 'Arrogance' when on a cricket field, he undeniably ushered in the new generation of "give it your all" cricketers whose success so determines the team's fortunes today. Be it the fierce stroke play of Yuvraj, the mercurial maverick of Harbhajan or the searching seam-play of Zaheer - the fact that Dada blooded these stars of today and backed them in times of crisis explains why he enjoys the respect he gets in the dressing-room. And amidst all that 'backing' and 'pushing' of new talent there was never a whiff of regionalism or 'lobbying' that the Azhar-Dungarpur era had so firmly established.


As a batsman, Sourav Ganguly figures in the list of One-Day Greats with ease any given day, the Tests not an apt reflection of his class though. At a time when Sachin was down in the dumps and Dravid was still to improve before he could mould himself to suit the shorter version of the game Sourav became the main-stay of the Indian batting order. Who can forget that innings he played in the win against Pakistan in the final of the Bangladesh Independence Cup in Dhaka. The entire nation was out on the roads celebrating the victory. And it was just the start.


As a Captain he is still to be matched, not only by the sheer number of trophies that he has claimed for the country but also because he stood out as a motivational leader of men who transformed a pack of 'mere hopefuls' into ruthless gladiators who would fight till the end. He infused the "killer instinct" into a team that Ravi Shashtri, during his commentaries, would often say it lacked. India now looked certain of a win when in the driver's seat and the millions of supporters knew in their hearts that the man wearing the shades, manning the slips, would not leave it to fate alone when it came to the grind. Instead he would make it work. He would switch bowlers, bring in fielders, bark out orders till something gave, till something 'happened'. In short, eight years before the world even knew of Obama, Sourav made us, Indians, believe that "We Can!" As a result we ended up beating most teams before being beaten by the best team in the world in the finals of the 2003 World Cup - a campaign which seemed doomed from the beginning itself but epic in its own right because of 'the turn-around' mid-tournament. During Sourav's tenure India started scripting victories rather than merely winning matches just because one of the two teams had to win. With a string of victories, both at home and abroad, that too at close intervals the team had firmly established its position of being 'Challengers' to Aussie dominance. Over were the days when a fan had to look back to the times of the Wadekars and the Vishwanaths to find a solitary victory on foreign soil. This was a new outfit. A squad which huddled and ganged, bullied and battered the opposition. Finally, we had a team which made a nation proud by exuding controlled aggression backed with adequate skill. The prayers seemed at last answered.

It is good that Dhoni seems to have inherited that same vein of aggressive leadership from Sourav. Though much more reserved on-field, he seems heartwarmingly effective with his decisions. It seems the reins are in good hands from here in time.


But all was not this rosy throughout. The purple patches soon turned into expanses of run-drought and the touch was all gone for Sourav. Balls outside his off-stump which would spear their way through the outfield following a swift command off the willow would now take innocuous nicks and nestle into the waiting hands of jubilant slip-fielders. Innings after innings would be reduced to joking speculations on 'which stump's turn it was today to be rattled' and the familiar arrogance was soon out-of-place. The Chappels were vocal, vile and to a degree villainous.
- " There are 10 players and Sourav Ganguly in the Indian team", the elder one said and the Prince of Kolkata was grounded, courtesy- the younger one. Fans in Boycott and Gower could offer little explanation for his prolonged "poor run". His time had come, all agreed.
He was dropped from the squad amid erratic cries of 'injustice', that a hero was being forced to make such an inglorious exit.


But taking what is dished out to him with servile submissiveness was so not agreeable to Sourav's princely demeanor.

He gave a fitting reply to his critics in the domestic circuit, eased into the test-team and scored runs in a fashion reminiscent of his prime. For a man who was time and again criticised for complacency he proved that he had what it takes to climb up from the ruins. His scores cried, "Its far from over". Instead, he showed how its only him who reserved the right to decide when to bow out, and on which terms.


Today when he walks into the sunset of his career he will deserve every accolade, every applause and every decoration that is due to him.

Like a true Hero that he is, I believe he will just savour the moment and hold that wry smile that grace faces which know the taste of a triumph from a victory.

One of the best blogs of urs till date....The cricketing world will surely feel the void with his departure.Salute to one of the greatest cricketing legends.

till my last days i will keep that "famous image of ganguly in lords" inside me..i always think he was removing and waving that t shirt for me...to wipe out all the stains that was left by our colonial past..
one of the best posts...
mip

"Straight from heart", what more can i say.For a person who has been my hero from the days he scored a ton in lords,these memoirs are cherishing.Hats off 2 u.We'll miss you DADA.

You have been Mapped